The central focus of any club revolves around developing young talent.

All clubs aim to bring out the best in their players. They seek to ensure that strides made through development on the practice pitch and in the classroom translate to on-field success for the club.

That’s the basic meaning of player development, but what it means to each club specifically gets a bit convoluted. Each club and staff might have different ideas on how to execute their philosophy. So we asked coaches from across the globe what player development means to them, and specifically what aspects of video analysis helps them gauge progress.

These are the key takeaways from those conversations.

Encourage Players to Make Objective Development Targets on Their Own

All coaches need to provide tangible feedback to players. That’s a given. The biggest changes players make, however, are when they can identify those areas that need improvement on their own before you bring it to their attention.

Chris Knowles, the first-team manager at Hartpury College enables his players to make objective observations about their level of play through video. “We really pushed them [this year] to identify areas that they can improve themselves,” Knowles said.

At Sparsholt College in England – the location of Southampton FC’s second chance program – the staff have players identify pre-match objectives based on development principles they highlight in training during the week. It’s all in an effort to engage players in their own development.

“I encourage them to watch the game so that when they come in they can analyze exactly how they did on those individual targets,” said Lewis Benson, lead coach at Sparsholt College. “I find that they really buy into that. They’re really keen to watch themselves back. The fact that I can actually say that they’ve done something well, or they’ve done something not so well and they can actually visibly see that themselves using Hudl is so valuable to myself and to them.”

The staff then utilizes video in post-match review sessions to talk through each objective with the team and individual players. “I’ve already got an idea, subjectively, what we’ve done, but then it’s about linking how I think we’ve done to how we’ve actually done [with video],” said Benson.

Setting objective measurements for success with your players can allow them to focus on specific development metrics that you, as their teacher, help them progress through. 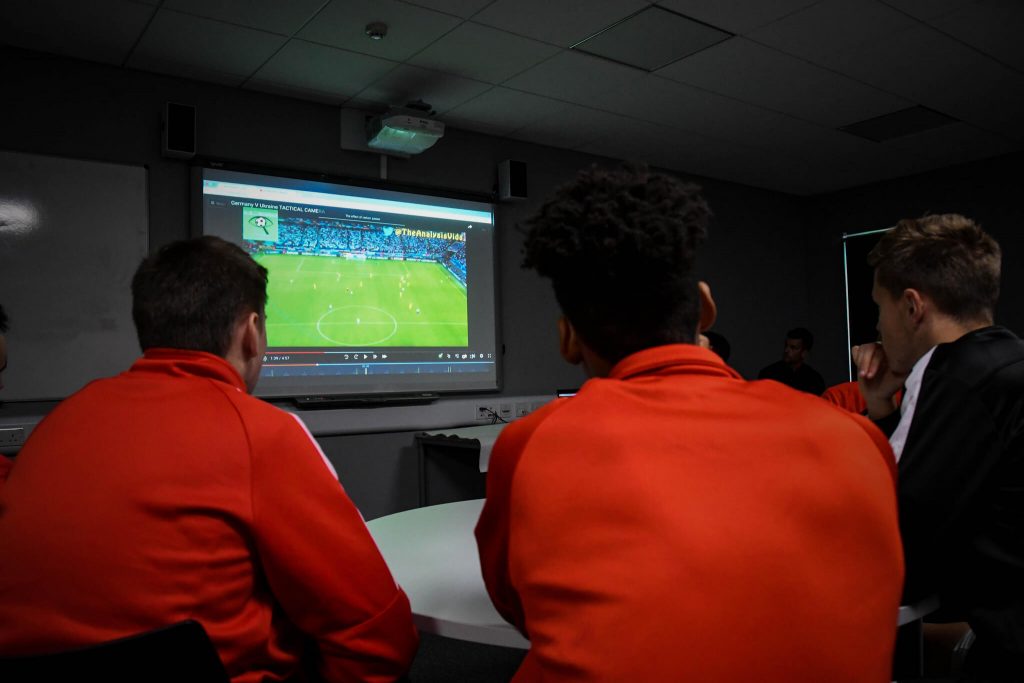 “In terms of a tool for developing players, there’s no better tool,” said Matthew Taylor, former First-Team Manager at Hartpury College and current U23 coach at Exeter City. “You go into training sessions and game situations where it’s hectic. Lads are affected by what’s going on around them. In a classroom, they can just see it on the screen and see the actual movements or what they with the ball from a possessional sense.

“It’s a great learning tool for the young players to develop their knowledge of the game.”

Many coaches advocated for emphasizing specific moments in matches and training where they are looking for players to improve. “You can say, ‘Look there’s your clips from two months ago.’ It’s really easy to find and pull up, then you can see where [they] are now,” said Matt Murray, First-Team Assistant Manager at the Nike Academy. “So you can look at how much they’ve improved in taking crosses, ball receiving skills, finishing with the left foot, all of those things.

“Its there and it’s a visual aid that’s really helpful for the lads.”

Video is the Barometer to Measure Improvement

How you choose to implement it within your coaching may vary, but ultimately, if you have all of the tools in place, development will follow. It’s about setting yourself up to take advantage with the tools you have at your disposal.

“I’m not a big fan of looking at evaluation where you put numbers to certain skills,” said Neil Hope of Omaha FC. “Like, ‘Susie is a 1 out of 5 with her left foot,’ or whatever. There’s no marker for that. The video doesn’t lie. It’s you showing it. With the video, we told them to address a simple thing, and if we never would’ve shown that they would’ve never known.”

So, how do they suggest you get started?

“I’d advise them to keep it simple to start with,” said Mikey Harris, Portsmouth Academy development coach. “Any information that you gather, you must know why you want it and what you’re going to use it for in terms of feedback to the players.

“Have a clear rationale behind what you want them to learn from it, how you want them to use it and then make it a part of your weekly program because the benefits are clear for all to see.”

Get involved in the conversation and tell us how you use video to assess player development.