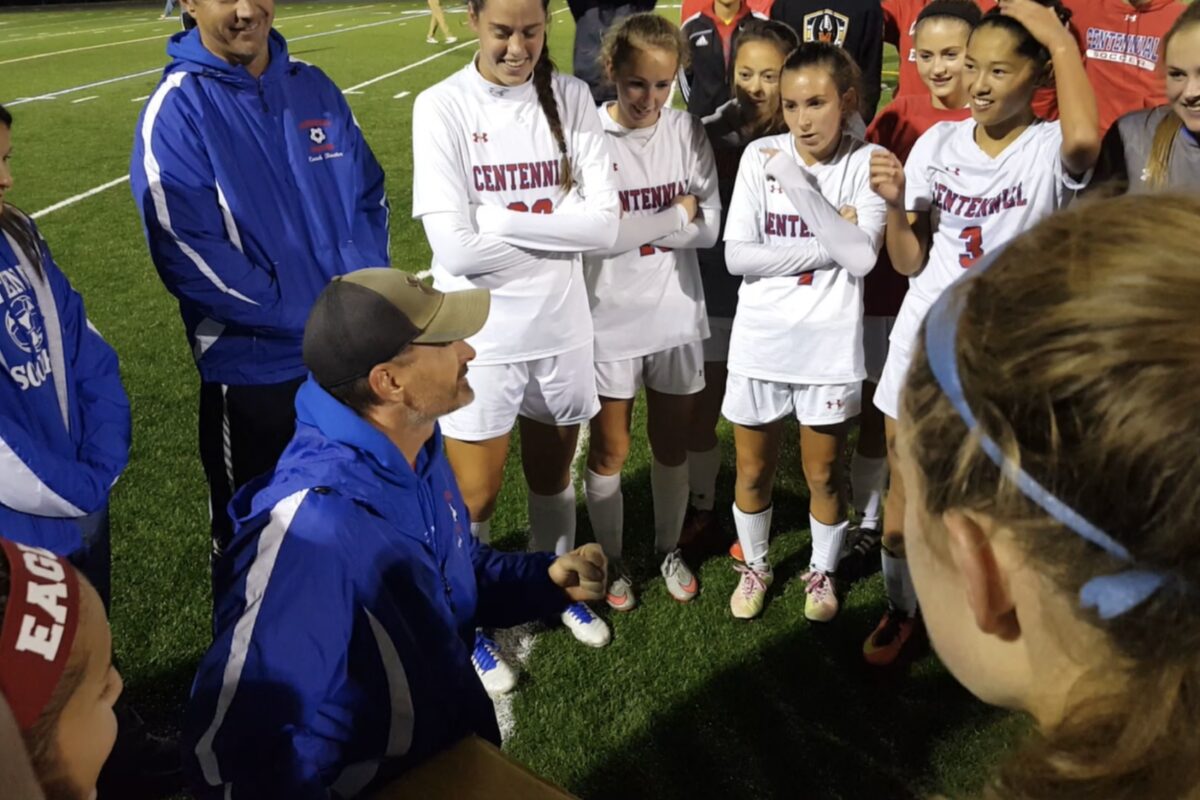 After seeing how film study transformed the powerful high school girls soccer program he ran in Maryland, Steven Baxter is returning to his home state of West Virginia with all the right tools.

Not all mounds of clay arrive the same.

In taking over the girls’ soccer program at Spring Mills High School (W. Va.), Steven Baxter is cutting down dramatically on his commute time. He can practically walk to practice from his house now, a big change from the 144-mile round trip commute he’d made daily during the season to his previous destination across the state line.

The trade-off is the substantial building job he’s taking on—bigger than what he inherited a decade ago at Centennial High (Md.). In nine seasons, he coached the Eagles to three regional finals and a state semifinals appearance in 2016.

“I used to be like a kid in a candy store, and I could mold the puzzle pieces together, focus on the tactics and things,” he said.

In this quiet Appalachian town nestled in the heart of the Mountain State’s eastern panhandle, at a school that opened just five years ago, Baxter is virtually starting fresh with a program that surrendered 80 goals in 2018. Holding the glass half full, there’s plenty of room for the Cardinals’ young program to grow.

But with that rawness comes a lot more work. There’s good bones on the program, with several high-caliber players. On the contrary, when asked where there’s the most opportunity to improve the program, Baxter chuckled, “The simple answer? Everything.”

It will start in the back end, where Baxter prides himself on a compact, layered defense that makes spacing hard to come by. This time around, though, he has more resources at his disposal.

In many ways the 2016 season at Centennial was a watermark year for Baxter, both for the Eagles’ run to the state semifinals, and for how much more game film he was using to implement his coaching principles. Baxter fondly recalls the region championship game that year, where thanks to some film he acquired, he was able to tailor his strategy specifically for a Westminster squad that was loaded with high-end talent.

Without film, Baxter said, “We would have been overwhelmed and trying to figure things out during the game.” Instead, they dominated, out-shooting their opponents and taking twice as many corners, en route to a 4-0 win.

The next year, Baxter got his own Hudl account—the rest is history. Baxter has brought plenty of film from his previous stop to show the Cardinals how he wants to play.

“Maybe I’ve got too much of an ego or maybe I believe in myself too much, but I know coaching makes a difference in every situation,” Baxter said. “I’ve been with high schools since 2009, so I think I’m lucky to have the opportunity to have the great footage I’ve put together from Centennial to share with these girls. It’s just awesome.”

Of the many Centennial clips he pulls out to show his new team, there’s a common theme—thorough, comprehensive details poured into every movement. There isn’t a wasted opportunity to create teachable moments through video analysis.

“I’ve been with high schools since 2009, so I think I’m lucky to have the opportunity to have the great footage I’ve put together from Centennial to share with these girls. It’s just awesome.”Steven Baxter, Head Girls Soccer Coach, Spring Mills (WV) High School

Any well-coached team will tell you that you must get compact and be organized when defending. It’s not uncommon for a high-performing team to defend with anywhere from seven to nine field players, depending on their talent and what kind of formation they’re running. Based on film from previous seasons, Spring Mills has some holes to clean up in the defensive third. At times, their defenders weren’t high enough up the field to support the attack or possession, leaving 60 to 70 yards of spacing between the back line and the forwards, with the midfielders scattered about. They didn’t get back quickly to defend, leaving things wide open and disorganized.

Baxter is particularly fond of one clip from his 2016 team that perfectly illustrates how good defenses compact in the middle third. In a manner of seconds after losing the ball in the middle of the field, midfielders and defenders have already cut off passing lanes, both at close range and to the opposite sideline. They force the opponent to make a negative pass and play the long ball, which gets easily overturned.

These may not seem like viral, highlight-worthy plays like the ones that populate your TV screen or social media feeds. But lots of these little clips add up to a sound defensive philosophy that makes opponents work for every inch.

At Centennial, Baxter had a great run of goalkeepers over the years, including one who currently plays at Marshall University. At Spring Mills, he inherits a long, athletic keeper and sees plenty of opportunities where she can own the space in front of her.

To explain what he’s talking about, he calls up a goal allowed from that great 2016 Centennial season that underscores the importance of being aware of the space around her. From where she was, 4–5 yards from the goal line, and with the scorer near the 30-yard line, Baxter shows that the keeper is completely beatable 24-feet wide and at the two feet below the crossbar. If she was back on her line or even one step off, she probably could have made the save.

“So, here’s an example of a kid who’s not in position, she can’t make the save because of where she’s putting herself,” Baxter says. “It’s a coachable point. You’ve got to recognize, when people are in shooting range, if you’re one step off your line, you can do a drop step for a tough save, but you’re not giving up the entire goal. You’re making them beat you with a good shot, not just putting it on target.”

Armed with laptops in the classroom, film has allowed Baxter to bridge those tough conversations with young athletes. It’s easy to deflect blame for any error on the pitch. He knows many of his early conversations will be about ownership. And there’s no better teaching tool than your screen.

“A lot of times people and parents, kids of that nature, they have a preconceived notion that it’s someone else’s fault,” Baxter says. “But film don’t lie. I’m just trying to keep it real, because you don’t get anywhere by sugar-coating and covering things up. Just look at the film.”