This article was provided by World Class Coaching

Former First Team Coach of Championship team Fulham FC. Sean is a UEFA A Coach with a Masters in Sport Coaching. He has over 15 years of experience working in professional football from Academy through to First team in the Premiership and Championship. Web – www.seanjreed.com. Twitter – @SeanJReed

Objective
This session focuses on possession with an overload, managing possession within a small area, working on passing and supporting angles. The team defending are looking to win possession of the ball to encourage a positive transition.

Set Up – Transition
The session is set up in an area 15-20yds x 15-20yds. The teams are split into 3 groups; 4 players (black bibs), 4 players (yellow bibs) and 3 neutral players (red bibs). The players are set up initially as; players in black bibs are the team in possession with support from the players in red bibs and the team in yellow bibs is defending.
The team in possession are positioned with the fours corners of the pitch, whilst the neutral players are positioned with 2 players on the outside of the area, both end and 1 player inside the area. The defending team are free to move anywhere within the area. When the defending team forces a mistake or wins possession the teams switch roles. See Diagram 1

Set Up – Transition with Goals
The session is set up as within the previous session. For this session two goals have been included for the defending team to attack when they win possession. As soon as possession is turn over they are looking to get a shot off into either goal. The team that has lost possession is looking to prevent the team from shooting. See Diagram 3.

Progressions
• Restriction on the number of touches 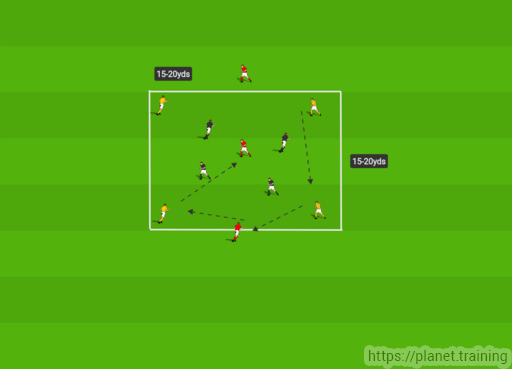 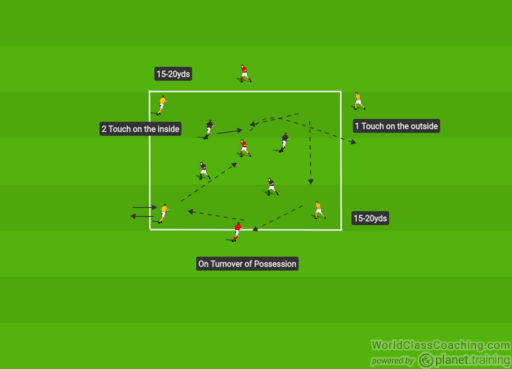 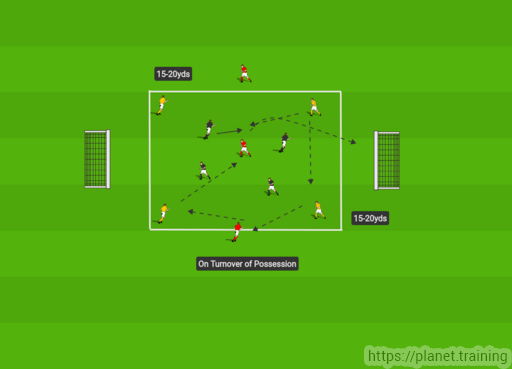