In the video clip below  from World Class Coaching Paul Heffer, who is the Assistant Academy Director at West Ham United, instructs players during a circle possession game drill.  Coach Heffer is a former professional soccer player that played for West Ham United and has lots of experience with training youth soccer players.

The players need to constantly think about where the open space is at.  Young players that lack experience normally struggle with finding the open space and will pass or dribble into congested areas, rather than going away from pressure.

The ball needs to move quickly in order for players to keep possession.  If the pace is too slow and not fast enough, the defending team will be able to steal it or at least put enough numbers around the ball to win it back.  Players should be instructed to play in 1 or 2 touches all over the field and to not stop or slow the ball down.

The YouTube video below has sound so please make sure that you have your sound turned on and that you have access to the site. Please note that some schools block access to YouTube.

If you are interested in improving your teams ability to take advantage of the oppositions defense, you might want to check out these 2 e-books from World Class Coaching . Just click on the images below for more information about Coaching Possession with Purpose: 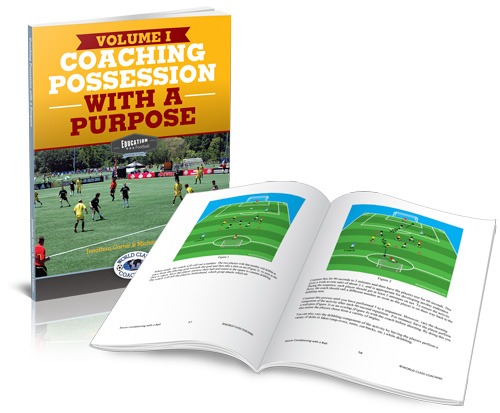