Gregg Gillies is a nationally licensed coach through the USSF and is a Youth Athlete Development Specialist and Head Coach at Mount Laurel United Soccer Club, where he currently coaches a u14 girls team, the MLU Raptors. He also is the owner of www.NoLimitsSoccerTraining.com, where his focus is on maximizing a player’s individual technical skills, soccer IQ, and overall athletic development

Players, especially at a younger age, struggle with the concept of specific off the ball movements in order to create space from a defender and get open to receive a pass. In this drill we are going to work on creating space using the specific techniques of ‘show to go’ and ‘go to show’, also known as ‘check away and to’ and ‘check to and away.’

Set Up: (20 yds x 10 yds) 3 players per group as shown below in diagram 1. Include a cone square in the middle with the cones roughly 4 yards apart.

There is a player at each end and one in the middle, standing next to one of the four cones. We are working on two specific movements – going away from the ball and showing back to it as well as showing to the ball and then going away into space. 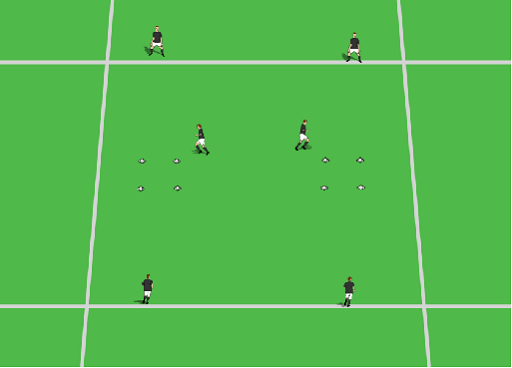 Above is the starting position of the drill. It shows two groups. The first group on the left will go through the show to go movement and the second will show the go to show movement. This can be seen below in Diagram 2. 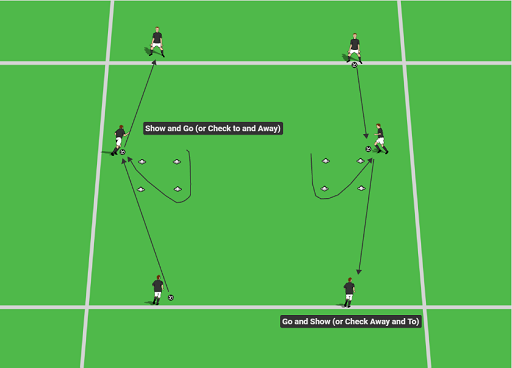 On the left, the player moves parallel to the two cones, toward the player with the ball and then bends the run diagonally away to create space from the defender, in order to receive a longer pass.

On the right, the player is starting closer to the player with the ball, starts the run away, and then bends back diagonally, sprinting into space in a support position to receive the pass, preferably in a side on position to be able to see the field. To do this the player must sell the “go” run in order to create enough space from the defender to receive the ball in this position, with the outside, or back, foot.

Once they receive the ball, they pass it to the third player on the other endline.

When initialy learning these movements with younger players, you can teach them one and reset after each play through.

Once they know the two movements, as you can see above, after passing the ball to the third player, they are in position to make the opposite run. If they started with a ‘show to go’ they are now in the starting position of the ‘go to show.’

When they know both, the drill can continue nonstop with the same player in the middle. You can rotate the middle player ever 60 to 120 seconds.

Coaching Points
The player needs to be decisive with their movement so that the defender sees it and stays with them on the initial run. Then the player turns quickly, changing the run and leaving the defender behind as they move into space to receive the pass.

The player needs to sell the initial movement to draw the defender before moving into space.

Timing – stress the importance of the timing, both of the run and the pass, so that the pass is received in space at the appropriate time.

Body Positioning – the player should check their shoulder on the “go to show” movement to be sure they can get in a side on position to receive the pass. While it’s not always possible in the game, be sure they put in the extra effort on the run to always get side on in this drill with no defense.

By getting side on and taking the ball with the back foot they are able to see the entire field as they receive the ball, giving them more time to make a decision.

In the ‘show to go’ movement, when successfully employed, the body positioning is completely different. In ‘show to go’, you are hoping for a slightly longer pass that can be played ahead of the player, into space for them to run on to, preferably to the outside of the now trailing defender, keeping the offensive player’s body between the ball and the defender.

Creating Space – The most important thing to know is where is the defender. This, along with the timing, weight and accuracy of the pass, will determine how a player is able to receive the ball. How do we do this? The player making the run must check their shoulder so they know if they’ve created enough space between them and the defender to open up and receive the ball in a side on position.

Decision Making – the player receiving the pass needs to make the correct decision on how best to receive the pass in order to keep possession.

Technique – a good decision needs to be followed by a quality first touch that allows the player to keep the ball and be able to make a decision to dribble or pass.

Progressions
In the first progression, as seen in Diagram 3 below, is quite simple. Remove the four cones making a square and replace with one cone, or pole to simulate the defender. Now the players need to make the same runs without the extra guidance of the four cones showing them exactly where to start the run and change direction.

With older more experienced players, you may start here (or even with the second progression in diagrams 4 and 5). 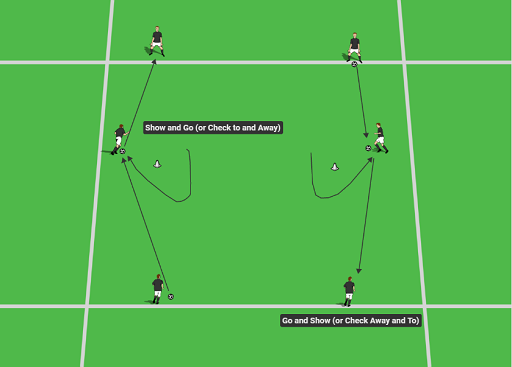 The next progression is seen in Diagrams 4 and 5. This uses a passive defender. 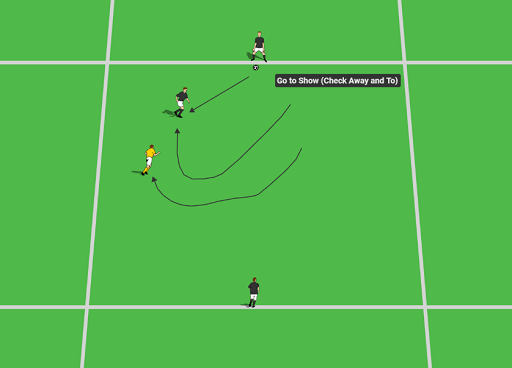 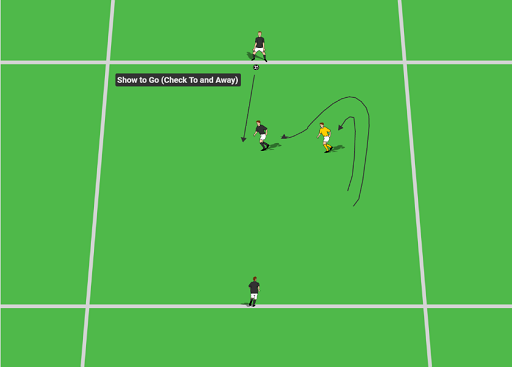 Once the players are doing well with this, you can have the defenders vary their response to the run. Sometimes let enough space be created (especially in Go to Show) so that the player receiving the pass can get side on. Sometimes have the defender not be fooled (but allow the player to receive the pass) and trail the offensive player but in a closer position so getting side on to receive would be difficult.

This will help get the player used to checking their shoulder and making decisions on how best to receive the pass.

The choice of which run to make is up to the offensive player. The defender knows it’s one of two runs, but not which one.

Movement off the ball, especially specific runs and techniques are not natural for younger players. They watch the ball. Including these two simple runs can help with that.

World Class Coaching is offering the following eBook for FREE. Just click the link below 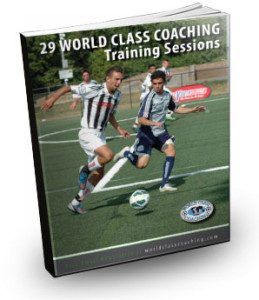