This article was provided by InnerDrive , a mental skills training company.

THE PSYCHOLOGY OF PERFECT PENALTIES

Nothing makes a sport psychologist cringe more than people saying that penalties are a lottery, that they are completely down to chance or that there is nothing you can do to prepare yourself for the unique pressure that comes from a penalty shoot-out. Chance certainly plays a part, but so does skill. So what strategies can players involved in penalty shoot outs employ that can give them the edge over their opponents? What does the research from sport psychology actually say about how to take the perfect penalty? 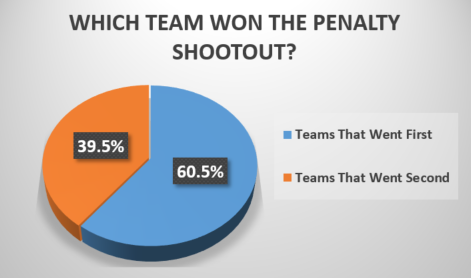 Before a penalty is even kicked, you can increase your chances of winning a penalty shoot-out if you win the coin toss and choose to shoot first. Professor Igacia Palacios-Huerta, of the London School of Economics, analysed 1,343 penalty kicks from 129 penalty shoot-outs and found that the team that started first won 60.5% of them.

This is most likely to be because of the increased pressure placed on the opposition penalty taker who is more likely to know the actual consequences of a miss. This overload of stress and split-focus hinders techniques by increasing tension in the player.

Indeed, pressure seems to play a big role in penalty shoot-out success. Research shows that if a player takes a penalty during normal time, they score on average 85% of the time. However during a penalty shootout, players know that their penalty may decide the outcome of the match. This increased pressure and stress results in the conversion rate of penalties taken during a penalty shoot dropping to 76%.

Most interesting though is that if a player steps up to take a penalty that will win the penalty shootout, and so the match, the success rate rises dramatically to 92%, whereas if they have to score or else their team will lose, the likelihood of scoring drops to under 60%. 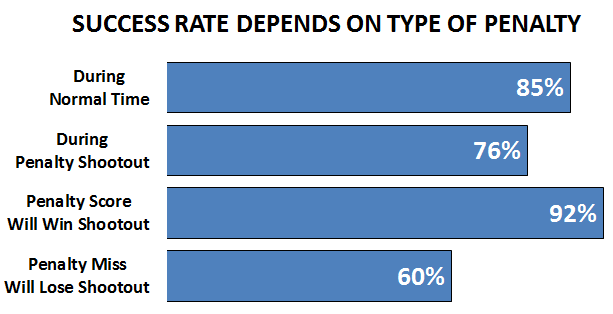 s thoughts and behaviour. In essence, the pain of defeats weighs very heavily on our mind.

Clearly, those who have learnt to handle their nerves have an advantage. There are two tricks here, and both relate to the relationship between the penalty taker and the goalkeeper. The first trick is to realise that after you have placed the ball down on the spot it is a mistake to turn your back on the goalkeeper as you walk back to the start of your run up. Psychologists have found that those who do are more likely to miss. This is because it interrupts their preparation, allows them to focus on things they cannot control, projects their nerves and provides the goalkeeper with subtle cues as to where the penalty is going to go.

The second trick is not to spend too long looking at the goalkeeper before the kick. In a study of 167 penalties, researchers found that those who fixated on the goalkeeper were more anxious and missed more penalties. It is far better to focus on your target and your abilities, or something that calms you down, rather than the opposition goalkeeper.

Once the referee blows his whistle, don’t rush to take your penalty. Take a bit of time to ready yourself. Footballer’s who take less than 200 milliseconds to respond to the referee blowing his whistle, only score around 57% of the time. To give this some context, that is half the time it takes to blink. Players who take a bit of time to ready themselves, be it only for one second, score on average over 80% of the time.

Historically, this has been a problem for players from England, who have a penalty shootout win record of only 17% and have been found to take their penalties quicker than any other nation. This is supported by quotes from Steven Gerrard who said in his autobiography, ‘Why do I have to wait for the bloody whistle? Those extra couple of seconds seemed like an eternity and they definitely put me off’. Interestingly, this rushing used to be an issue for Spain as well (with a penalty win record of 33%), however their recent penalty wins at the last two European Championships suggest they have learnt from their previous mistakes (you can see their penalty wins in Euro 2008 against Italy and their Euro 2012 win against Portugal in the videos below):

As well as not rushing, players are advised to pick a spot and commit to it. Changing your mind leads to uncertainty, stress and poor technique. Some players leave it to the last minute and wait for the keeper to dive before hitting it to the other side. However, this is a high risk strategy and is associated with a greater number of missed penalties.

It is far better to pick a spot that you feel confident of hitting and commit to that. Penalties that are on target and high in the goal are rarely saved. This is because it is very hard for goalkeepers to reach these areas. However, it requires the penalty taker to trust their technique as there is a small margin for error as they may miss the target if they aim here. If they have the ability to execute this penalty (and trust in that ability), the payoff is worth it. A great example of this was when Germany beat England in a penalty shoot-out in Euro ’96, with 9 out of the 11 penalties that were scored going in the top corner.  By comparison, Gareth Southgate’s saved penalty went low and to the left.

Once you have scored your penalty, your job is not quite finished. It is important to celebrate. A study of 151 penalties from recent World Cups and Euro Championships found that if a player celebrated their successful penalty, their opponent was far more likely to miss their next penalty.  Their analysis showed that when the score was equal, 82% of players who celebrated their successful penalties went on to be on the winning team.  This is called ‘emotional contagion’, which describes how the emotions of one player can negatively affect the emotions of the next penalty taker  Watch how every penalty taker for Italy celebrated their goal during their penalty shoot-out win against France in the 2006 World Cup.

A recent study has found that the colour of the goalkeeper kit may impact the likelihood of their opponent scoring. The fewest goals was scored against goalkeepers who wore red (54%) or yellow (69%). The two worst colours? Blue (72%) and green (75%). Interestingly it would seem that the goalkeepers from England (blue/purple), Spain (blue), Germany (black), Italy (white) and Belgium (green) will not be getting this advantage at Euro 2016.

What is the best strategy for a goalkeeper to employ in order to save a key penalty? Research suggests it is for them to stand still. Analysis of 999 penalties from the Bundesliga found that 15% of players shoot down the middle. A separate study of 286 penalty kicks from the top leagues around the world found that only 2% of goalkeepers remain in the centre. It is calculated that goalkeepers are actually twice as likely to save a penalty if they stay in the middle of the goal rather than dive to one side or the other.

Researchers state that standing still is therefore the ‘optimum strategy’ for saving penalties. Goalkeepers can’t do this for every penalty, as opponents will quickly work out that this is there strategy and hit it elsewhere (this is known as ‘game theory’), so a degree of randomness is needed.

So why do goalkeepers rarely stand their ground? Psychologists refer to this behaviour as an “action bias”, which is where the value of being seen to do something is higher than that of doing nothing.  If they dive and the opponent scores, the goalkeeper doesn’t attract blame, but if they stand still and the opponent scores then they do get blamed. It seems this fear of blame sub consciously overrules a perfectly good strategy.

SUMMARY: THE STRATEGIES TO “BEAT THE ODDS”

Penalties are not a lottery. They are not completely random or down to chance. Often it is only the losing team who describe it as such.  Players and teams can tip the balance in their favour by following some simple tricks and strategies.